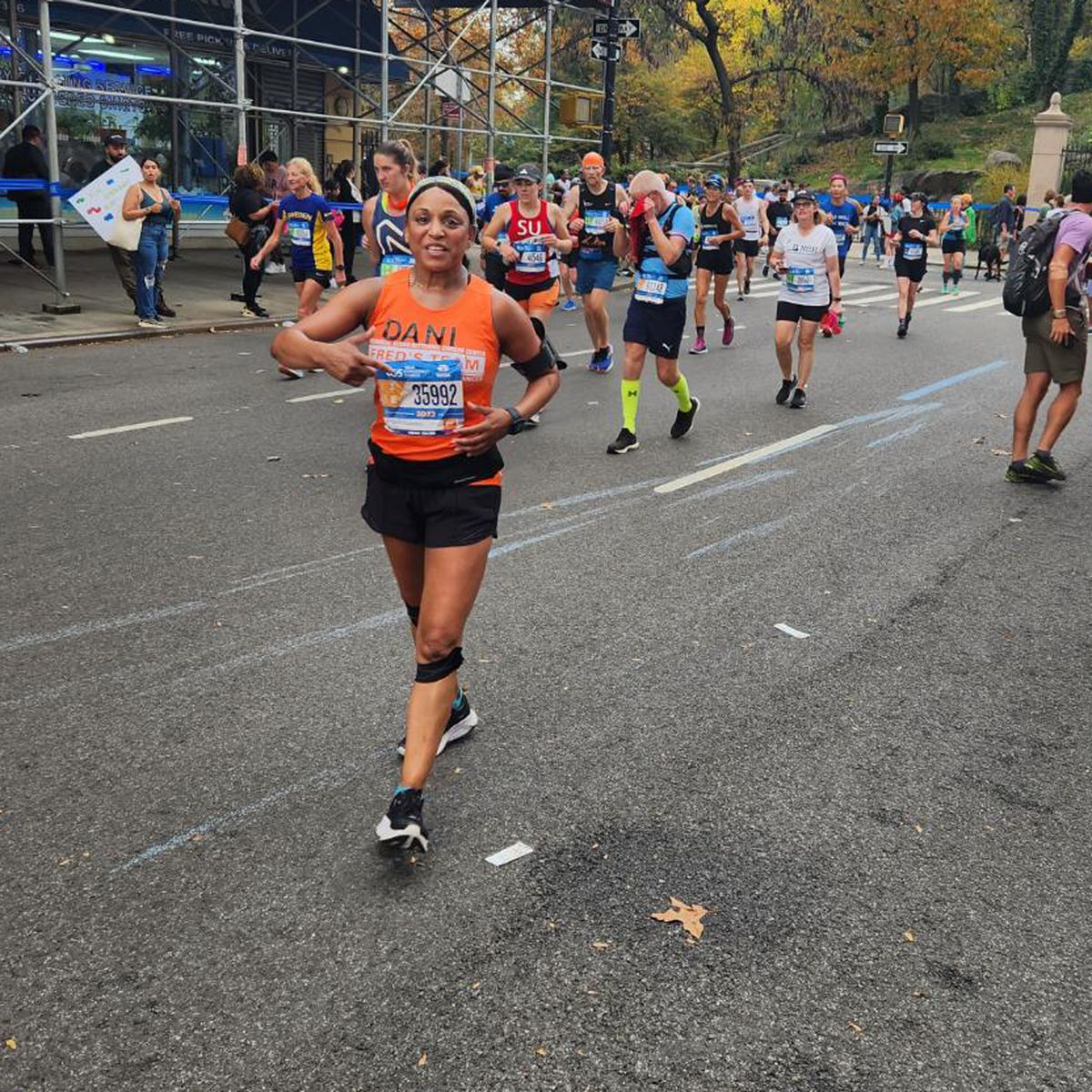 Name: Danielia Cotton
Age: 55
Hometown: New York, New York
Occupation: Singer, songwriter, musician, mother
Time Running: 30+ years
Reason for Running: I ran this year’s New York City Marathon to raise money for cancer research, as my spouse currently has stage 4 lymphoma. Remaining optimistic, stable, and supportive for both my 4-year-old daughter and my partner can be challenging, especially when I am feeling emotional about all we are facing. Running this year’s marathon saved me mentally on many levels and helped me to just breathe through everything.

I began running when I was in junior high, along with my younger sister, who showed signs of being a gifted runner from an early age. We ran together on our school team and were the only two Black team members. We were basically an unbeatable running team against anyone when placed together in relays or separately in shorter-distance runs. Our coach, who my sister remains close with to this day, was extraordinary and would make us join the cross-country team every fall despite our complaints and resistance, as he felt it was the best prep for track and field in the spring and summer.

Running on that cross-country team was the first time I ran long distance, and I believe that is where I first became attracted to that type of run. One can go into their thoughts and head while breathing. Plus, being one of less than 10 Black kids in my junior high, I welcomed anything that allowed me to transport myself to wherever I desired.

Having been trained early on by a great coach in junior high and high school, one thing I did retain was that it was necessary to have a training plan and that one needs to build up distance through calculated training plans and a consistent regime that you can adhere to and that requires some discipline.

I continued with running while attending a small college in Vermont. Even though there were no sports teams, I enjoyed running around the picturesque campus.

After college and after meeting my current spouse, we eventually moved to New York City, and I always worked out—but had not run in quite a few years. We both found ourselves wanting to be healthier individuals and so we began training for and running marathons.

My first marathon was in Burlington, Vermont in 2002. It was an incredibly memorable marathon as I ran in honor of my spouse’s late uncle, John Roberts, who had unfortunately died of leukemia that year. This then led me to Fred’s Team, a team made up of runners raising money for lifesaving cancer research at Memorial Sloan Kettering.

Since that first 26.2, I have run five more marathon, including New York this year, which was a particularly significant one. My spouse has stage 4 mantle cell lymphoma, which is an aggressive form of non-Hodgkin lymphoma that, to date, is incurable. He was diagnosed right before the pandemic, which scared me on many levels as he was facing all this with an immune deficiency.

In the beginning, his systems seemed manageable, as doctors quickly placed him in a clinical trial. Since then, we have had a few scares that took quite a bit out of me emotionally. We also had our first child, Olivia—who is now 4 years old—approximately a year before his diagnosis.

Running quickly became a place where I could breathe and be free from all my worries for the span of my run, all while listening to songs from my favorite artists. It was one of my favorite rituals. Doing the marathon gave me this seemingly insurmountable goal to conquer, and that was probably one of the best decisions I made this past year. It saved me on multiple levels and once again connected me with Fred’s Team.

Despite the heat during this year’s New York City Marathon, it was an unforgettable experience. After 13 miles in over 70-degree weather, which by any standards is extreme for a race of this kind, I bonded with a fellow Fred’s team member. We talked, quickly became acquainted, and began telling our stories to one another as to why we were both running. And we made a pact to get each other to the finish line.

As we spoke for those few hours, we suddenly realized her best friend’s husband, who she was running in honor of, had died within the last year—but only after running the NYC Marathon himself with stage 4 cancer and while on chemotherapy. It was a story like mine. On top of all that, we somehow discovered after looking at our race number bibs, that we were literally one number apart, an insanely rare coincidence that led me to believe we were meant to meet, and it made this year’s race one for the books.

For the first time, I ran without headphones and music in my ears. Instead, I took in the crowds cheering while making a new friend. For the first time ever while running a marathon, I was completely present and in the moment. It was unforgettable. So much so that I entered to run with Fred’s Team for a seventh time in April 2023 in London. This will be my last race, hopefully with even more funds raised for cancer research. I am hoping for a race time that allows me to hang up my marathon running shoes with pride.

I, myself, am also a thyroid cancer survivor. My doctor first felt nodes in my neck area during a routine exam and suggested I get it checked out. Unaware of the seriousness of the situation, I waited for more than a year before having an ultrasound, which led to a biopsy revealing a malignancy. I was sent to an endocrinologist in 2012, who informed me that I needed to have part of my thyroid removed where the cancer was located. During surgery, he realized they needed to remove the entire thyroid to avoid future risk, and knowing that I was a singer, he took the necessary precautions.

I was literally back on the road for a short tour within eight weeks of the operation. Luckily, and due in large part to the doctor’s call to remove the entire thyroid, I was not required to have any radiation or further treatment outside of two yearly checkups and bloodwork to confirm that no cancer is present. To date, I remain cancer-free and am only required to take medication once a day as I no longer have a thyroid.

Now that I am officially running the 2023 London Marathon, I am going to continue where I left off and this time focus more on hill training regardless of the flat terrain of the London Marathon. I will also focu son core training, which is always necessary, and I will continue with the crucial mobility work and yoga. However, I will reintroduce weight training this time around.

One element that I recently incorporated into my running routine was acupuncture. It surprised me how beneficial it was and the effect it had on my overall performance.

This time around, I am aiming to run a between a 4:00 and 4:30 race. I am extremely excited that my last race will take place in another country. And I think there will be benefits to running this race only five months after my last one.

I love running because it helps me breathe. It transports me much like meditation does and allows me to focus on just being in the moment. My awareness of my physical body is different when I run and when done right, it feels like I am floating. While I run, the songs playing in my ear transport me to different places, some fantasy, some real and when I finish and return home, I’m patient and much more relaxed.

Living in New York City is exciting but always active. Running slows things down for me in the best way and gives me space and time to think about whatever is on my mind without outside distractions.

Running for me is extremely personal and I generally prefer doing it alone outside of races.

When starting out, don’t be hard on yourself. When I trained for my first marathon after not running in years, I started with a mile at a time. The process can be as slow as it needs to be and always listen to your body. It will tell you when it needs attention. Training is always beneficial when doing longer races and will only help your time. Running will always be a tool to center for me and a place where I am reminded of the beauty of the outdoors and how crucial it is for all of us to take care of the world in which we live.

I love discovering an artist’s depth during a run because my listening engagement is at a much higher level than at other times. I truly discovered Neil Young running my first marathon. I recall listening to “Old Man” and being so engrossed in the story he tells that I forgot I was running and exceeded a 17-mile training run in the process. For me, it is spiritual.

These three tips have made my running journey a success:

Almost all runners have tight muscles. This time around, my mobility training changed the game. It allowed me to repair quickly, and address and repair joint and muscle issues. Increased mobility can help improve your range of motion, which in turn, helps you improve your stride and your running pace.

Your core is basically the center of everything. It also allows your pelvis and hips to work together, which inevitably allows you to expend less energy.

Never underestimate how important the correct running shoes are to your running game. It can completely enhance your experience, or cause injury when not chosen correctly. Get an assessment by a good podiatrist or at a runner’s shoe store.

→ Beats Studio Buds: These earbuds are my new favorite listening device while running. The sound is phenomenal, and they never die or fall out on long runs.

→ Lululemon Hotty Hot Shorts: Lululemon shorts, tops, and leggings are my go-to in all weather—such a solid brand and so many options.

→ Saucony Echelon 8 Shoes: These running shoes are my favorite. I overpronate and these address that issue while providing great support. I have run every marathon in Saucony.

→ Apple Watch Series 8: This watch does everything for me. It carries my music, tracks my pace and gives me all the necessary stats I need while running. It’s a no-brainer.

Emily Shiffer is a freelance health and wellness writer living in Pennsylvania.

How to Move Your Workout Indoors This Winter

What to Expect from Running While You're Expecting

Master the Incline With These 4 Hill Workouts

How Breathing Affects Your Performance

Here’s When You Should Avoid Running in the Cold

The Impact of Hydration on Disease and Longevity